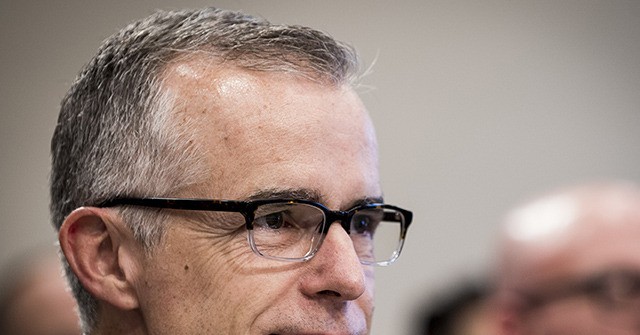 Former Acting Director of the FBI Andrew McCabe will not face criminal charges for allegedly lying to agents about a leak to reporters, according to a Department of Justice (DOJ) letter released Friday afternoon.

DOJ tells former Acting Director of the FBI Andrew McCabe that it will not pursue charges against him. pic.twitter.com/imAyjZs9Nq

McCabe was under investigation for reportedly lying to FBI agents in 2017 who were investigating a leak to the Wall Street Journal which he allegedly authorized. The Washington Post reported that a grand jury was impaneled for the case in 2018. Breitbart’s Joshua Caplan wrote:

FOIA-ed FBI documents revealed this January that agents were frustrated with McCabe for wasting their time following other leads after he denied involvement in the WSJ leak.

“I remember saying to him, at, I said, ‘Sir, you understand that we’ve put a lot of work into this based on what you told us,’” the agent said.

“I mean, and I even said, long nights and weekends working on this, trying to find out who amongst your ranks of trusted people would, would do something like that.’ And he kind of just looked down, kind of nodded, and said ‘Yeah I’m sorry.”

In response to the new evidence, a White House official told Breitbart News that the “hypocrisy” of the alleged wrongdoing was unacceptable. “Andrew McCabe, while serving as Deputy Director of the FBI, lied to the FBI,” the individual said. “Then he lied about lying. He has thrown thousands of men in jail for lying to federal investigators. This hypocrisy cannot go unpunished.”

Fox News reported in September 2019 that U.S. Attorney Jessie Liu recommended moving forward with charges, as lying to the FBI is a federal crime — the rationale for federal prosecution against several of President Donald Trump’s allies, such as Lt. Gen. Michael Flynn.

This is a developing story. Follow Breitbart News for updates on this topic and breaking Politics stories.