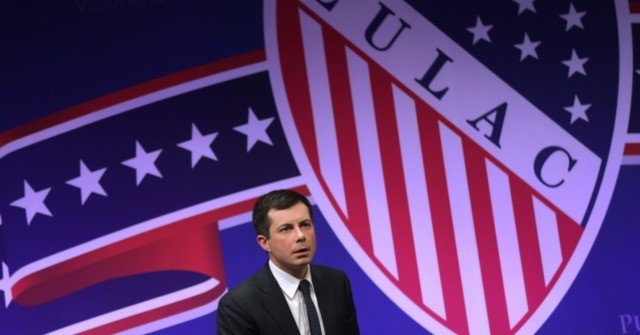 Former Mayor Pete Buttigieg tried to kick off a town hall event with Latino voters on Thursday night by showing off his Spanish skills, but he immediately stumbled.

In Spanish, he said, “Thanks for inviting us to speak…” before pausing and resorting back to English to conclude, “…this evening.”

Buttigieg stumbled over the Spanish pronunciation of invitarnos” (inviting) which sounded like “inventarnos” which means “inventing.”

He also appeared to forget how to say “this evening” in Spanish, resorting to English instead.

Many of the crowd in North Las Vegas, Nevada, laughed at Buttigieg, prompting him to blame his stumble on the lack of sleep on the campaign trail.

“Not quite sleeping enough but delighted to be with you,” he said.

Buttigieg appeared at the League of United Latin American Citizens Presidential Town Hall on Thursday to talk about his campaign.

Later in the evening, Buttigieg successfully answered some of the questions in Spanish, earning cheers from the audience.

The mayor has been stepping up his Spanish ahead of the Nevada caucuses, where the electorate is more Latino.

After winning his primary in New Hampshire, Buttigieg told illegal immigrants brought to the country as children that they belonged in the country.

“We celebrate your belonging in this country and, yes, this country is your country too,” he said in Spanish.