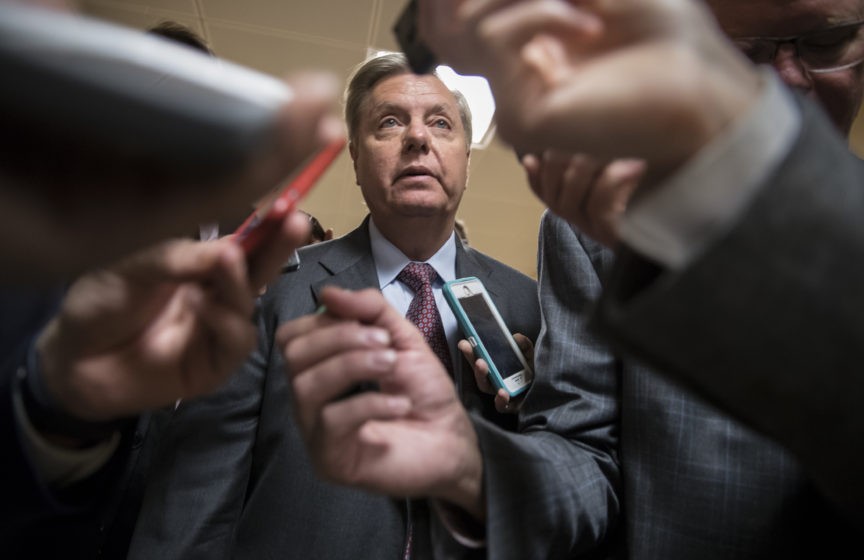 Sen. Lindsey Graham (R-SC), the chairman of the U.S. Senate Judiciary Committee and a top ally of President Donald Trump, told Breitbart News exclusively on Thursday that he is calling on governors, especially those in red states, to develop a fix to an unemployment loophole in the massive $2 trillion coronavirus rescue passage the Senate passed Wednesday night.

The bill, for which Graham and 95 other senators voted, passed the U.S. Senate unanimously on Wednesday evening. It only got 96 votes because four GOP senators are quarantining due to either having coronavirus or concerns they might have been exposed. The bill is expected to pass the U.S. House of Representatives on Friday morning via voice vote, House leaders say, and will make its way to President Trump’s desk, where he is expected to sign it.

The bill contains many positive things to help rescue the economy, including direct payments to many Americans as well as funds for a variety of industries and loans for small businesses that will be forgiven, assuming they maintain their workforces. But one particular part of the bill, Graham told Breitbart News, represents a potential serious threat to the economy as a whole—and he said that while he voted for the overall package, this problem needs to be fixed soon.

“There’s a lot of good stuff—that’s why I voted for it,” Graham told Breitbart News in an exclusive interview on Thursday afternoon.

The problem, the senator explained, is that this bill includes an additional $600 per person per week if they are laid off or unemployed. The federal government has never had a federal unemployment program, as those matters and benefits have been handled by the states until this bill. The issue here, however, as Graham explained, is that in some cases people may end up—by collecting unemployment checks from both their state and the federal government—making more money per week during the four-month duration of this novel federal unemployment program than they would should they keep their job.

In the state of South Carolina, for instance, the maximum weekly unemployment benefit, Graham said, is $326 a week. So people who are laid off due to the coronavirus crisis would collect that, plus an extra $600 per week from the federal government under this bill. Given the unique nature of the coronavirus crisis—which is the fault of no American—Graham said his and other senators’ goal is to ensure that people are “made whole,” in that they get their whole salary through these expanded unemployment benefits. But, he is concerned that this loophole in the program, where the states and federal government are not in sync with each other, may end up making it such that somebody makes more money by collecting both unemployment benefits than they would by working.

“Let’s use South Carolina as an example—$326 a week is the maximum benefit,” Graham said. “I want to be more generous than that. We have a $600 federal pot. If you’re making $30,000 a year, I don’t know what that is a week. About $576. So you should go from $326 up to $576, but under the way the bill is written, you’d get $600 on top of the $326. That incentivizes people not to work, because the computer can’t make the adjustment, which is bizarre to me because to get the unemployment benefits you have to give the agency information on your wages—what you make at work—and who your employer is.”

In other words, somebody making $30,000 a year in South Carolina could end up making more than a $48,000 salary during the four months in which this program is in place. That makes the average hourly wage of collecting unemployment under this system in South Carolina around $23 an hour—more than many well-paying jobs in the state. The issue is similar, with different numbers, in other states. That could have an adverse effect on hiring—as companies like Amazon, which is reportedly looking to hire right now, would be competing against the government paying higher wages for not working than they can afford to pay for somebody to work.

“The average hourly wage for unemployment benefits in South Carolina would be $23.14 an hour,” Graham said. “So if you’re making $15 working, you look like a chump. So, bottom line is it’s going to be difficult for people to hire because they’re competing with a $23 an hour government wage. So, like Amazon wants to hire 100,000 people? They’d probably take $14 or $15 an hour. But they’d have to jack their wages up, which would affect the entire economy. So this artificially incentivizes people to stay out of the workforce and it makes hiring in certain areas of the economy almost impossible due to the technological glitch.”

If someone were making more than that—say $30 or $40 an hour—Graham says, “you would only go on unemployment if you were laid off.”

What Graham wants to happen is for anyone affected by the coronavirus crisis to make their full salary if they are laid off during it. But what he does not want is the government making it such that people make more money by collecting unemployment benefits than by working. In other words, he wants to set it up in states whereby the state unemployment benefit would match their salary—whereas currently the state provides people a benefit that is less than their full salary. The full $600 extra from the federal government should match up to what someone is making, but not have them making more than when they were employed.

“We want to make them whole, but we want to not have a system where they make more money to not work,” Graham said. “I was the first Republican to reach across the aisle and say ‘let’s beef up unemployment.’ I never dreamed that we’d come up with this system. I never dreamed that we would have a system that pay people not to work. I wanted to make them whole, people in the low level of the economy. But it went the other way. In South Carolina if you combine the two, it’s $23 an hour. Ted Cruz told me in Texas it’s $28 an hour. So, a lot of people are not making $28 an hour in Texas.”

The issue, Graham said, is the state unemployment systems—which are different in each state—are months away from modernizing payment structures and technology to be able to make people whole but not pay them more to not work.

Graham said that the problem needs to be fixed as soon as possible, because if the virus resurges in the fall, even after public health efforts by the Trump administration vanquish it this go around, then the country may need to turn back to this system as a solution again.

“So I am not going to tolerate this as the answer for the country,” Graham said. “The virus will probably come back in the fall, and this will hit us all over again and when there’s a big spike in unemployment due to the containment policies we face a Hobson’s choice here. With 3.3 million unemployment claims announced this morning, it’s probably going to get worse here. So it’s imperative that we fix this so that we don’t incentivize people to leave the workforce. We need to fix this because this problem is going to be with us for a very long time.”

So to answer the problem, Graham said, he is calling on Republican governors nationwide and red state insurance commissioners to develop a solution that can serve as a model for the nation.

“So what I’m going to do when we get back is create incentives for states to fix this problem, so that you get made whole but you don’t get a pay raise,” Graham said. “I am looking for a conservative governor to show the country how to do this. I believe that a governor that can figure out, a state unemployment commissioner that can figure out how to fix the system is going to get rewarded by the federal government, but it’s also going to help the economy. Under the current system you’re literally paying people more not to work.”

Graham has not, since this interview with Breitbart News on Thursday afternoon, spoken with any governors yet, but he intends to begin doing so soon, starting with South Carolina Gov. Henry McMaster.

“I’m going to start with my governor,” Graham said. “I was told by [Eugene] Scalia: Y’all need to call somebody at Labor. There are rules on the books that won’t be followed. The rules are you can’t get unemployment if you quit, so if people leave their jobs to get more unemployment that’s not going to be enforced. You need a small army to enforce that. Employers are not going to throw their people over. So I hear about all the way the law works, I live in the real world—I live on Main Street—and I know exactly what’s going to happen here. If you make $23 an hour not to work for four months, most people will probably do that.”

Graham said he’s confident that somewhere in America, a governor or insurance commissioner will solve this problem.

“Somebody will invent a software that can be widely applied,” Graham said. “Then again—in Bernie’s world, Bernie Sanders’ world, I’m being mean. But I think we’re being smart, because most Americans would prefer to work, and most Americans want to pay their government to pay people more to work than not to work. In Bernie’s world, that’s fine—he’s okay with a $23 an hour minimum wage.”

Then, when a state develops a solution, Graham will take that back to Congress and offer it up for the whole country.

“Then I get the Congress to basically revisit this issue and take the solution and spread it around and give people 30 days to implement, and give them money to help implement it, and if they don’t they’re going to lose some of that benefit,” Graham said. “Carrots and sticks.”

Graham said the coronavirus pandemic has exposed a previously unknown vulnerability in the state-run unemployment system, and now with the federal government creating its first-ever such program—even though it’s temporary—those weaknesses are being thrust into the spotlight.

“Our state unemployment system was like our testing system: It wasn’t set up to deal with a pandemic,” Graham said. “Well, this may not be the last one we have and this thing may come back in the fall so we have to fix it now. Every day we go forward it puts pressure on the economy. You can’t really regenerate because you’ve created a perverse incentive for people to be out of the workforce.”

That’s why Graham is hopeful that a state somewhere in the union, probably one with a GOP governor, will sort this out.

“We’re making a call to arms here to see if we can get some state to figure this out, so we can make people whole but not create an incentive to get out of the workforce, because this is a real problem and people will be incentivized not to go back to work, and people who need to hire are going to have a hard time of it,” Graham said.